Showing posts from November, 2008
Show all

By Skyler J. Collins November 21, 2008
Here's a comedic look at how capitalism and the free market has blessed our lives: (If you can't view the embedded video, see it here .)
Post a Comment
Read more

Separation of State and Marriage

By Skyler J. Collins November 07, 2008
As my family drove home tonight along a street in downtown Salt Lake City, we were delayed by several hundred, make that thousands of people around Temple Square protesting the LDS Church. It wasn't like any protest I've seen in this city and was quite a testament to our right to protest. (Of which I am grateful.) So why were they protesting the LDS Church? Because the LDS Church was one of the main proponents of the recent proposition in California to amend the state constitution to define marriage as only a union between a man and woman. I happen to support that proposition as well. And here's why. What first needs to be answered is why, in this day and age, the state (by which I mean the government) is involved in the practice of marriage. It wasn't always that way. Traditionally, marriage was a function of religion and was a religious ceremony. The question is why the state became involved. The answer is because society wanted to encourage marriage as it led to th
Post a Comment
Read more

My Consent Has Been Given 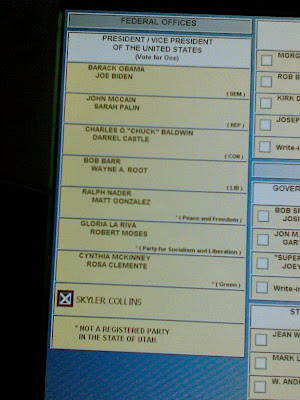 Alas, I have given my consent to be governed by the one whom I believe best represents every one of my values and ideals. (Click the picture to enlarge if you can't tell who it is.)
Post a Comment
Read more
More posts