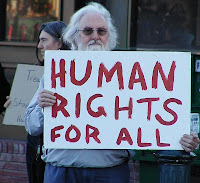 February 2019: I read this essay and added commentary for Episode 286 of the Everything Voluntary podcast.

What are rights? The purpose of this short essay, or collection of thoughts, is to explore that question.

So many commentators on rights treat them as something tangible, such as:

The previous phrases must be understood as:

The idea of rights, or more accurately, the idea that no one else can make a claim of control and authority over us, is as far as the "social contract" can go. It cannot go any further than this without being a tangible contract (written and signed). By claiming we have rights, we are than forcing ourselves by that claim to respect the rights of others. To disregard the rights of others, then, is to disclaim our own rights. This is why exercising control and authority over others in retaliation to the control and authority they exercised over us is logically and morally justified. By initiating aggression against you (your person or property), they have shown they don't believe in the concept of rights, and so cannot object to their being aggressed against (arrested, incarcerated, executed) by you (or your agents). It must also be understood that retaliatory force cannot exceed the level used by the initiator for this very reason.

This brings me to my final thought. Because a right is the claim that we are the only ones with control and authority over ourselves, all rights must be understood as property rights. The right to believe what I want requires my controlling my mind; the right to say what I want requires my controlling my speech; and the right to defend myself requires my controlling my whole person in removing it from or resisting harm. It is because we own ourselves, our minds, our bodies, and whatever material external to us that we either homestead (first to claim ownership of out of nature through utilization) or trade for, that we can claim any rights at all, relative to others. If anyone else assumes control and authority over us that we have not given them, then such is a claim of full- or partial-ownership, thus reducing us to slaves. To limit what I can believe, what I can say, how I can defend myself, or even what I consume, is to make a claim of ownership over me. For reasons explained above, this would be completely unjustified and illegitimate. Every law passed and every law we submit to, must be weighed against this concept of rights that I have outlined here.