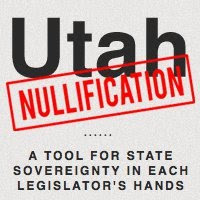 Lehi, UT, July 6, 2010 — On the heels of the release of bestselling author Thomas E. Woods' new book, Nullification: How to Resist Federal Tyranny in the 21st Century, a local political activist has launched a project to put the book into the hands of every state legislator in Utah. In his latest work, Woods, a senior fellow at the Ludwig von Mises Institute, explains the history, purpose, and effective use of state nullification as a check on federal laws and programs that exceed constitutional authority.

On the announcement of the Utah Nullification project, Woods commented: "Thomas Jefferson warned that if the federal government is allowed to hold a monopoly on determining the extent of its own powers, we have no right to be surprised when it keeps discovering new ones. History clearly shows that it has just done that, and despite their protests, resolutions, and lawsuits, the states have repeatedly ceded their sovereignty to an ever-expanding accumulation of federal power. The subject of nullification is one that every concerned citizen should familiarize himself with, but most especially the legislators of the several states. I look forward to what will unfold in Utah once each of the state legislators is given the opportunity to study this information and consider its application."

Project organizer Connor Boyack explained his idea, noting the role nullification has already played in Utah: "This project's goal is to give every Utah state legislator an opportunity to understand how we as a state can assert our sovereignty and refuse to comply with clearly unconstitutional federal mandates which exceed the limited and specified delegated powers found in the U.S. Constitution." Boyack continued: "Utah has already used this power on several recent occasions, when refusing to comply with the Real ID Act, when declaring that locally produced and sold firearms are not subject to federal regulation, and in opting out of the recent federal health care legislation."

Boyack's project seeks to raise $2,000 to cover the cost of the books, packaging, and shipping to each of Utah's state legislators. Any money left over will be used to send a copy of the book to Utah's federal delegation, as well as other state officials, including the Governor, Lt. Governor, Attorney General, and Utah Supreme Court justices.

"I'm encouraged by Utah's several bold and important assertions of state sovereignty," Boyack said, "and hope to see it happen even more. Those legislators who accept and read this book will quickly come to understand how badly nullification is needed, and how many opportunities exist for its use."

Those interested in donating to the project, tracking its progress, and learning more about state nullification can do so at www.utahnullification.com.