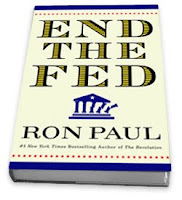 Why You Should Care


"Everybody thinks about money and almost everybody wants more. We use money without thinking much about its nature and function. Few of us ask where it comes from, who controls it, why it has value, and why it loses value from time to time.

In the same way, most people accept the Federal Reserve, the manager of the nation's money stock, as an indispensable institution that the United States cannot function without, and so they don't question it. But I assure you, especially in this post-meltdown world, that it is irresponsible, ineffective, and ultimately useless to have a serious economic debate without considering fundamental issues about money and its quality, as well as the Fed's massive role in manipulating money to our economic ruin."


"Following the creation of the Fed, the government would discover other uses for an elastic money supply aside from keeping the banking system from defaulting on its obligations. It would prove useful in funding war. It is no coincidence that the century of total war coincided with the century of central banking. When governments had to fund their own wars without a paper money machine to rely upon, they economized on resources. They found diplomatic solutions to prevent war, and after they started a war they ended it as soon as possible."


"Whenever I talk of a gold standard, there are always people ready to accuse me of having some obsession or fixation. Fetish is a word thrown around. In fact, I'm only observing reality: the idea of sound money in most of human history has been bound up with gold money. Can there be sound money without a gold standard? In principle, yes. And I'd be very happy for a system that would permit markets to once again choose the most suitable money, whatever that turns out to be. I'm not for government imposing any particular standard: no central bank, no legal tender, no privilege for any commodity chosen as a backing for the currency."


"Although the Fed was primarily responsible for the financial bubbles, the malinvestments, and the excessive debts, other policies significantly contributed to the distortions that had to be corrected. Artificially low rates of interest orchestrated by the Fed induced investors, savors, borrowers, and consumers to misjudge what was going on. Multiple mistakes were made. The apparent prosperity based on the illusion of such wealth and savings led to misdirected and excessive use of capital. The false information generated by the Federal Reserve policy led to a false confidence that all would be well."


Why End the Fed?


"The Federal Reserve should be abolished because it is immoral, unconstitutional, impractical, promotes bad economics, and undermines liberty. Its destructive nature makes it a tool of tyrannical government.

Nothing good can come from the Federal Reserve. It is the biggest taxer of them all. Diluting the value of the dollar by increasing its supply is a vicious, sinister tax on the poor and middle class.

The Federal Reserve's monetary policy has brought us to where we are today, in a tragic economic mess."


"The process of monetary debasement, by inflating the money supply, redistributes wealth unfairly and dangerously from the middle class to the wealthy. It's based on the principles of fraud and is equivalent to counterfeiting. Its goals are achieved through stealth and are difficult for the masses to recognize. Instead, the people are conditioned to believe that easy credit, monetizing debt, and affirmative action loans are reflective of good economic policy and are morally motivated.

The tragedy is only recognized when the fraud of an immoral, unsustainable monetary inflation comes to an end. That is what we're suffering from today."


"By manipulating the supply of money and setting interest rates, the Fed has practiced backdoor economic planning. The Fed essentially keeps interest rates lower than they otherwise would be. In a free market, low rates would indicate adequate savings and signal the businessperson that it's an opportune time to invest in capital projects. But the system the Fed operates discourages savings, and the credit created out of thin air serves as the signal for investors to spend, invest, and borrow excessively, compared to a system where interest rates are set by the market...

...The Federal Reserve is responsible for the boom-bust cycles. It's responsible for price inflation, recession, depression, and excessive debt. Although the central bank can get away with mismanagement of the economy for long periods of time, its policies are always destructive. Unchecked, the policies of a central bank lead to financial chaos, an example of which we are now experiencing."


"While a gold standard would be a wonderful change, we shouldn't wait for one before we end the Fed. The dollar has a preeminent role in the world economy. It benefits from its long history as a hard money. This will not change in a post-Fed world. The dollar could continue on as it is today, and its value would start to rise once markets were convinced that the money supply would be fixed."


This is a must read, as well as the suggested reading he lists in the back of the book. Get it here at Amazon.