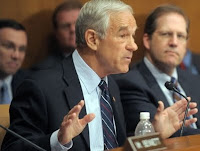 I've had my share of mixed feelings regarding Ron Paul. As a defender and promoter of liberty, Ron Paul is matched by few men. He's introduced millions to individualism, free markets, sound money, and non-interventionism. I applaud him and praise him for his selfless efforts in this beautiful cause. He's taking his principles to ever wider audiences, and as President of the United States, he would have a greater platform than any libertarian has ever had in the fight for freedom.

But I have my reservations. One the one hand, there are those who argue that a Ron Paul victory would only prolong the life of the American Empire. While it may have it's reigns tightened for a time, it would ultimately continue it's course of plunder and destruction once Ron Paul is out of office. While Ron Paul would be a beacon for educating the masses on the principles of liberty, when the Empire does reach it's logical conclusion, Ron Paul and libertarianism would be made into a scapegoat. I have sympathy for this position.

On the other hand, with Ron Paul reaching ever-wider audiences, and people finally being offered an alternative to the statist quo, he may do just enough to make serious inroads to the growth and centralization of the State. He would, purportedly, bring all the troops home and close down hundreds of foreign bases. He would pardon non-violent drug offenders, freeing millions(?) with the stroke of a pen. He would stop enforcing unconstitutional laws and promote respect for State sovereignty. He would be a very powerful weapon for decentralization from Washington. These are things that are certain, moves toward liberation and freedom that would happen now.

Mixed feelings indeed. Of course, this is all theoretical. I believe he'll be assassinated before he's able to do anything of consequence, as I explored here. That aside, it will be an interesting next few years. There will be a silver lining either way. While I don't believe a post-collapse America uneducated on the principles of liberty would keep a free society for very long, it would end the plunder and destruction by the Federal government immediately. Likewise, a Ron Paul presidency would make real advances on correcting injustice and righting wrongs. Perhaps either way, liberty wins for a time, before the state makes it's seemingly inevitable rise once again.

Anonymous said…
He is a prime candidate for assassination. Every president that has ended, or attempted to end, a central bank has been killed or an attempt has been made.

I like Ron Paul, he seems like a nice guy. He holds most of my views, except for one major issue. He wants control of the state. Even if he brings reform I would like to see, he is using the coercion of the state to do so.

The state just needs to collapse unde its own weight. People need to see it as the failure it is, then I think it would be easier to convince people to try it without government.

If RP wanted to make real incremental change, he should run for governor of Texas and set the example for other states to remove themselves from centralized power. The first step to eliminating the apparatus of the state is to decentralize. Decentralizing local power becomes easier all the way down to the city/town level.
January 4, 2012 at 10:10 AM

Veresapiens said…
If we have to have a President of The United States, Ron Paul is the one I would want, because I truly believe he would do his best to minimize State power over people's lives.

However, as a voluntaryist, I avoid participation in the activities of coercive organizations, like the State. In fact, I believe that the mass withdrawal of consent and particpation, and the shunning of all things State is the best way to weaken the State. So, I don't vote, and will not vote for Ron Paul.

I think it is an unfortunate paradox that Ron Paul's freedom-oriented campaign will lure so many otherwise anti-state people into participating in Democracy's ultimate ritual. Too many people who would otherwise understand and agree that you can't 'fix' government by 'electing the right people' are now out working the grass roots to get out the vote for Ron Paul.
January 4, 2012 at 8:41 PM