Ron Paul, Electable, IF He Survives 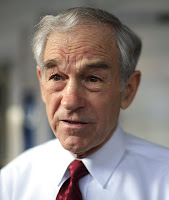 I've been debating with myself on whether or not I should even make this post. My thoughts on what I'm about to say have a dual meaning. First, on just how far-reaching and consistent Ron Paul's libertarian principles are, and Second, how far I believe we've strayed as a society from the Christian principles to love our neighbor as well as our enemies.

In theory, everything points to Ron Paul being electable. He can out-left the Left and out-right the Right. But I think that's also his downfall. He has too many enemies, and those enemies have too much power. Just look at this list:
And the list goes on. I see too many special interests with too much on the line (money) to allow a Ron Paul victory. He wants to capsize the boat that is Big Government. And here's the really disturbing part, I even go as far as believing in the possibility of Ron Paul being assassinated if he even gets closes to winning the election. Blood follows money, and his enemies have a lot of money. I wouldn't put it past them to fill pinched enough by a potential Ron Paul presidency to resort to murder. The ex-Federal drug warrior or military contract employee who'll lose his job because his skills are no longer needed would be the perfect pawn to be manipulated in such a way to get the trigger pulled.

I hate that I believe this to be a real possibility. I hate that I see our society as one obsessed with entitlement, the desire to benefit at the expense of others, and the desire to control unpopular habits and behavior at the point of a gun.

And another point, I'm not sure we deserve a Ron Paul presidency. Our cup is filled to the brim with this belief that the American government can do no wrong, and if it does, all we need is a little reform. Reforms haven't worked, and won't work. Ron Paul is the only one running for the presidency that understands this, and will do something about it. And that just might get him killed.

Dallin Crump said…
I must admit the thought of physical harm coming to Dr. Paul if he advances far enough in the political process has crossed my mind, as well.

But I have to also wonder if those who would support such a vile, heinous act would really want to risk making a martyr out of the man.
August 29, 2011 at 3:34 PM

Ron W. said…
I've thought much about this very thing and have pretty much come to the same conclusion as you. I hope we're both wrong.
August 29, 2011 at 3:38 PM

Joyce Simons said…
I think everyone who knows anything has thought about this possibility and I even feel a little guilty for promoting him knowing this. Can we ask such a fine man to sacrifice himself for a cause when we know the opposition and who they are and how they function?

But haven't we all been called for such a time as this? The desire for freedom burns in my breast. It does it the people who support Ron Paul.

"Our country is in danger, but not to be despaired of. Our enemies are numerous and powerful; but we have many friends, determining to be free, and heaven and earth will aid the resolution. On you depend the fortunes of America." --Joseph Warren

terry freeman said…
Martyrdom would be like a spark on tinder; liberty now has far too many supporters to imagine that an assasination would not accelerate the demands for liberty.

I expect, rather, vigorous attempts to marginalize, to demonize, and to split supporters. For example, Sean Hannity recently claimed to support 95% of Ron Paul's ideas, except for those pesky noninterventionist foreign policies(in particular, Iran).

Ron Paul answered, paraphrased, we are not authorized to invade Iran; we cannot afford to do so; it would harm our national security to do so, and it would harm Israel's interests for us to do so.

I'd add, if you really agree with 95% of libertarian ideas, then you presumably agree that government agencies have strong tendencies to be inefficient, wasteful, self-serving, and counterproductive. Why make an exception for the military? At what point do you begin to suspect the endless chain of self-serving claims that America is always at risk from One More Enemy?
September 28, 2011 at 8:17 AM

Anonymous said…
They killed Jesus and all he wanted was to give people was freedom. People like being slaves.
December 14, 2011 at 4:55 PM

Paul would win a in landslide akin to the TEA Party, the Contract with America, and Ronald Reagan.

Romney will lose in a landslide akin to John McCain, and Bob Dole.