In Defense of Sweatshops II

By Skyler J. Collins January 15, 2009
Believe it or not, the New York Times actually printed a column in favor of factories in third-world countries commonly called "sweatshops". Op-ed columnist Nicholas Kristof wrote and created a short documentary about the benefits that these sweatshop give to foreign workers. I can't say enough how much I support efforts to increase the number of these factories appearing in the third-world. I truly believe it is the only way to raise their standard of living and to save lives. And I believe measures taken that oppose such are evil. The article and video can be found here. The introduction:

Before Barack Obama and his team act on their talk about “labor standards,” I’d like to offer them a tour of the vast garbage dump here in Phnom Penh.

This is a Dante-like vision of hell. It’s a mountain of festering refuse, a half-hour hike across, emitting clouds of smoke from subterranean fires.

The miasma of toxic stink leaves you gasping, breezes batter you with filth, and even the rats look forlorn. Then the smoke parts and you come across a child ambling barefoot, searching for old plastic cups that recyclers will buy for five cents a pound. Many families actually live in shacks on this smoking garbage. 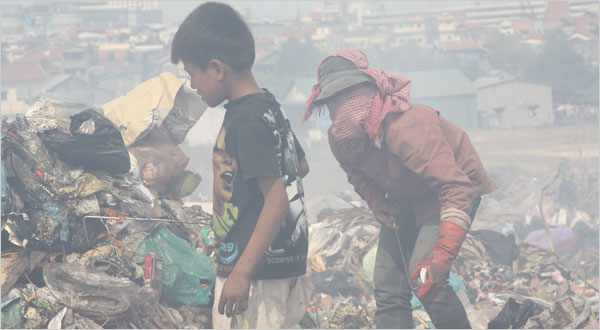