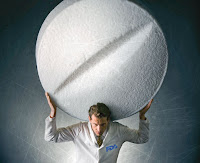 The Washington Post reports here about the latest Supreme Court ruling that says that drug companies are ultimately responsible for harm caused by their drugs. This is interesting because, as the report says, the Food and Drug Administration, in 2006, changed it's policy and adopted rules that would insulate drug companies from lawsuits resulting from harm their FDA approved drugs caused. Obviously, this deems the FDA useless, in regards to approving drugs, and returns drug regulation back to the market and the courts, where it should be.

The Cato Institute's policy handbook has this (and more) to say regarding the FDA:

The Human Costs of FDA Delays

As an agency, the FDA has a strong incentive to delay allowing products to reach the market. After all, if a product that helps millions of individuals causes adverse reactions or even death for a few, the FDA will be subject to adverse publicity with critics asking why more tests were not conducted. Certainly, it is desirable to make all pharmaceutical products as safe as possible. But every day that the FDA delays approving a product for market, many patients who might be helped suffer or die needlessly. For example, Dr. Louis Lasagna, director of Tufts University’s Center for the Study of Drug Development, estimates that the seven-year delay in the approval of beta-blockers as heart medication cost the lives of as many as 119,000 Americans. During the three and half years it took the FDA to approve the drug Interleukin-2, 25,000 Americans died of kidney cancer even though the drug had already been approved for use in nine other countries. Eugene Schoenfeld, a cancer survivor and president of the National Kidney Cancer Association, maintains that ‘‘IL-2 is one of the worst examples of FDA regulation known to man.’’ In the past two decades patients’ groups have become more vocal in demanding timely access to new medication. AIDS sufferers led the way. After all, if an individual is expected to live for only two more years, three more years spent testing the efficacy of a prospective treatment does that person no good. The advent of the Internet has allowed individuals suffering from specific ailments and patient groups to use websites and chat rooms to exchange information and to give them an opportunity to take more control of their own treatment. They now can track the progress of possible treatments as they are tested for safety and efficacy and are quite conscious of how FDA-imposed delays can stand in the way of their good health and even their lives.