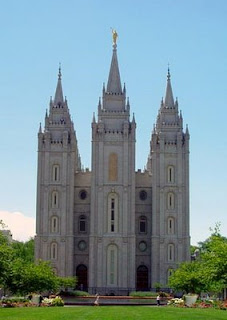 I may incur some wrath from my fellow liberty-lovers, but that would only mean they didn't read the whole article. As a libertarian, I celebrate the right the Mormon church has to control who is and who isn't allowed on their property. All libertarians should. Full disclosure: I am a member of the Mormon church. A recent apparently newsworthy event went out over the Internet stirring up, once again, the anger that so many have towards the Mormon church for their position on homosexuality. Leave it to the MSM to report on a controversial story without having all of the facts. Had they, it probably wouldn't have been a story.

What I wanted to focus this article on was the celebration we should all be having on what's left of our freedom of association. I will state it unequivocally (again), that our commitment to freedom is proven when we allow others to discriminate by whatever variable they choose. Be it who they'll hire or for whom they'll work, who'll they serve or who they'll patronize. This is one of the greatest freedoms we could have. Could you imagine it being illegal to discriminate as a consumer or employee? Try enforcing that! But it's the logical, if impossible, next step in "fighting" discrimination.

As a Mormon, I know the church wouldn't arrest a homosexual couple for just being homosexual while on their property. Or even for sharing a small kiss. No, it would take much more. I'm sure alcohol, groping, profanity, and assault had much more to do with the arrest than just a simple kiss. Couples kiss all over Temple Square all the time. I'm certainly guilty of that. What the couple was arrested and cited for was breaking the rules the church has set for their property. And I'm glad the Salt Lake police department respected their rules and their right to make them, and enforced the law.

We should use this time to celebrate two things: freedom of association and property rights. Because of how the MSM reported the event, I bring up freedom of association. Had the church simply arrested them and had them removed from their property because they were homosexual, though libertarians can bemoan that it happened, they must support the right the church has to do such a thing. Had the facts been fully known and reported, there wouldn't be any question on whether or not the church did the just thing. It would be obvious to all that they did, and as property owners, they exercised their rights in enforcing the rules they've set. This is a time for celebration.