Beyond Open or Closed Borders 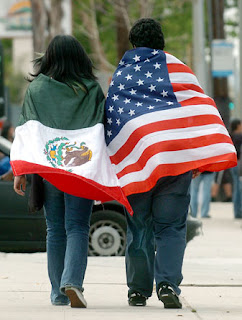 As a libertarian, I believe in freedom of travel, but I also believe in property rights. What I never considered before was just how property rights and free or "open" immigration may conflict. At least not until I read this article by Lawrence Vance. He explains that although people should be free to travel, they shouldn't be free to trespass on the property of others. He also makes other points against "open" borders having to due with the welfare state and other social programs. The introduction:

Human migration is an ancient, inevitable, and unstoppable global phenomenon. Yet immigration is an issue that divides both conservatives and libertarians. Some advocate a completely unhindered immigration policy ("open borders"), while others favor a total moratorium on immigration for a period of time. Most people are somewhere between these two extremes. Although there are many differences among people of all parties about the economic, political, social, and cultural advantages of immigration, there is one thing that all sides should agree on: there is no "right" to immigrate if it means trespassing on someone else’s property.

Some advocates of "open borders" just don’t seem to get it. It is bad enough that they insist, that the free market requires free immigration and that free trade and free migration go hand in hand. It is worse, however, when they imply that those who support some restrictions on immigration are racists, xenophobes, and bigots. I wish they would refrain from insinuating that any restriction on immigration is incompatible with laissez-faire capitalism.

I also want them to quit misrepresenting the views of their opponents. The opposite of "open borders" is not "closed borders." Libertarians who reject "open borders" are not "anti-immigrant" or "anti-immigration." No proponent of restrictions on immigration wants to close the borders and completely end immigration – no matter how much he is concerned about immigrant lack of assimilation and immigrant use of taxpayer paid health, education, and social services.