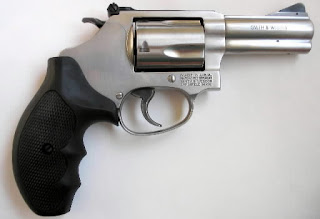 Yes, I believe that's true. Currently, I only own one gun. I'd like to own more. I'd like a smaller one that's easier to conceal than what I've got, and I'd like a small shotgun. I'm glad I live in a part of the country that I'm free to own as many guns as I'd like, and carry open without a license, and concealed with one. This is one of the greatest freedoms most people enjoy here in America. I've recently come across two great articles on this topic that I'd like to share. The first is by a liberty-loving woman named Karen De Coster, and the second by journalist Charley Reese (the introductions):

Women never cease to amaze me. The majority of them are still "afraid" of guns. Afraid, as in "oohhhh, they are so scary." They say things like "I don’t like them around" and "they’re dangerous." I know of women who have defense-minded, pro-gun husbands and they will not let their guy talk about those nasty things in their presence. Shhh, the children will hear, or, they might actually see an evil gun! Keep them locked away. Don’t tell the neighbors you have a gun in our house, or we’ll be outcasts. And in the background you can almost hear another feeble Oprah sermon keeping women stupid, but oh, they feel good about themselves and their newfound self-esteem.

All the time, women are shocked, shocked! to hear that I have a gun, and worse, I have several guns. And then, oh no, I actually carry one with me. That’s so odd, they think. Oh she’s different. Why more than one gun? She must be the aggressive type. After all, the Oprah way is to trust everyone and insist that all people have good intentions always.

Although I tend to think that most women don’t make sense, period, I especially believe this concerning the gun issue. It’s not only difficult to get women to come around to wanting a gun of their own, but they still can’t get to the point where they will understand and accept why others want to own them.

Let’s face it – women are more vulnerable to attack because, most likely, their aggressor will be a man. Women are physically weaker, and criminals know that we are less willing to be mentally prepared for aggression because, unlike men, most of us just aren’t wired to be combative. A woman’s attacker will be bigger, stronger, and faster than her, and by nature they will be more aggressive, and that’s before considering any mental or drug problem that may be associated with a criminal attack. So why do women not want to take that into consideration and equalize the situation by learning to use and love guns? Dr. Thomas Szasz, libertarian scholar and Professor of Psychiatry at Syracuse University, once stated, "self-defense is not merely our legal right but our moral duty; because women are more vulnerable than men, their need and obligation to defend themselves is even greater than that of men." Dr. Szasz is a wise man.

The positions of most urban liberals on firearms are dumb, dumber and dumbest.

It is dumb to suppose that the way to decrease crime is to make sure all potential victims of violent crime are disarmed. It is dumber yet to believe that a criminal will obey a gun-control law. No bank robber or rapist has ever set out and then stopped and said, "Gosh, I don't have a permit for this weapon, so I guess I'd better not rob that bank or rape that girl." No serial killer has ever said: "Gosh, I can't kill this person with an unregistered weapon. That would be against the law."

A gun is neither a romantic nor a sinister object. It is just a plain tool, like a hammer, a saw or a router. It can be used for recreation, and it can be used for self-defense. Like a chain saw, it can hurt its owner if the owner is careless or stupid. But the modern firearm is inherently safe. The gun cannot load itself or fire itself. Properly stored and used, it is safer than a stepladder or a swimming pool or an automobile. It is even safer than eating.