The Man Who Saved a Planet 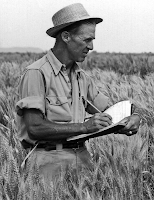 Nobel laureate and founder of the Green Revolution, Norman Borlaug recently turned 95 years old and an interview conducted by the Reason Foundation nine years ago was re-posted on their Hit & Run blog. I was unfamiliar with Mr. Borlaug and the Green Revolution until I read that interview and his Wikipedia page. It seems to me that this man could very well be credited with saving our planet. I recommend educating yourself on what he accomplished. An excerpt from the interview:

Reason: What do you think of organic farming? A lot of people claim it's better for human health and the environment.

Borlaug: That's ridiculous. This shouldn't even be a debate. Even if you could use all the organic material that you have--the animal manures, the human waste, the plant residues--and get them back on the soil, you couldn't feed more than 4 billion people. In addition, if all agriculture were organic, you would have to increase cropland area dramatically, spreading out into marginal areas and cutting down millions of acres of forests.

At the present time, approximately 80 million tons of nitrogen nutrients are utilized each year. If you tried to produce this nitrogen organically, you would require an additional 5 or 6 billion head of cattle to supply the manure. How much wild land would you have to sacrifice just to produce the forage for these cows? There's a lot of nonsense going on here.

If people want to believe that the organic food has better nutritive value, it's up to them to make that foolish decision. But there's absolutely no research that shows that organic foods provide better nutrition. As far as plants are concerned, they can't tell whether that nitrate ion comes from artificial chemicals or from decomposed organic matter. If some consumers believe that it's better from the point of view of their health to have organic food, God bless them. Let them buy it. Let them pay a bit more. It's a free society. But don't tell the world that we can feed the present population without chemical fertilizer. That's when this misinformation becomes destructive...

Borlaug: I don't believe that. If we grow our food and fiber on the land best suited to farming with the technology that we have and what's coming, including proper use of genetic engineering and biotechnology, we will leave untouched vast tracts of land, with all of their plant and animal diversity. It is because we use farmland so effectively now that President Clinton was recently able to set aside another 50 or 60 million acres of land as wilderness areas. That would not have been possible had it not been for the efficiency of modern agriculture.

In 1960, the production of the 17 most important food, feed, and fiber crops--virtually all of the important crops grown in the U.S. at that time and still grown today--was 252 million tons. By 1990, it had more than doubled, to 596 million tons, and was produced on 25 million fewer acres than were cultivated in 1960. If we had tried to produce the harvest of 1990 with the technology of 1960, we would have had to have increased the cultivated area by another 177 million hectares, about 460 million more acres of land of the same quality--which we didn't have, and so it would have been much more. We would have moved into marginal grazing areas and plowed up things that wouldn't be productive in the long run. We would have had to move into rolling mountainous country and chop down our forests. President Clinton would not have had the nice job of setting aside millions of acres of land for restricted use, where you can't cut a tree even for paper and pulp or for lumber. So all of this ties together.

This applies to forestry, too. I'm pleased to see that some of the forestry companies are very modern and using good management, good breeding systems. Weyerhauser is Exhibit A. They are producing more wood products per unit of area than the old un-managed forests. Producing trees this way means millions of acres can be left to natural forests.