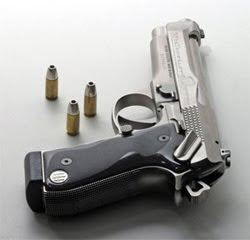 Another state sovereignty push has begun sweeping the nation, and it's centered on our right to bear arms. The Firearms Freedom Act has been passed, introduced, or intended to introduce in a number of states recently. From the official site:

Originally introduced and passed in Montana, the FFA declares that any firearms made and retained in-state are beyond the authority of Congress under its constitutional power to regulate commerce among the states.

Since its passage in Montana, a clone of the Firearms Freedom Act has been enacted in Tennessee, and has been introduced in the legislatures of Alaska, Texas, South Carolina, Minnesota and Florida. Legislators in many other states have announced that they will introduce FFA clones when their legislatures next convene.

The FFA is primarily a Tenth Amendment challenge to the powers of Congress under the “commerce clause,” with firearms as the object – it is a state’s rights exercise.

To date, those states that have passed the FFA are Montana and Tennessee. States that have introduced the FFA include Minnesota, Michigan, Texas, South Carolina, Florida, and Alaska. Finally, those states intending on introducing FFA legislation are Washington, Idaho, Wyoming, Utah, Colorado, Arizona, New Mexico, Oklahoma, Kansas, Missouri, Louisiana, Alabama, Georgia, North Carolina, Virginia, West Virginia, Ohio, Indiana, and New Hampshire. That leaves a total of 22 states that have not indicated their intention of introducing FFA legislation.

It's very interesting to see the development of this bill around the nation. After Montana and Tennessee passed their FFA legislation, the federal Bureau of Alcohol, Tobacco, Firearms, and Explosives sent letters to those states residents that hold federal firearms licenses. Here's an excerpt from the Tennessee letter:

The passage of the Tennessee Firearms Freedom Act, H.B. 1796, 106th Leg. (Tenn. 2009) 1796 ("Act"), effective June 19, 2009, has generated questions from industry members as to how this State law may affect them while engaged in a firearms business activity. The Act purports to exempt personal firearms, firearms accessories, and ammunition manufactured in the State, and which remain in the State, from most Federal firearms laws and regulations. However, becasue the Act conflicts with Federal firearms laws and regulations, Federal law supersedes the Act, and all provisions of the Gun Control Act and the National Firearms Act, and their corresponding regulations, continue to apply.

What the ATF has done here is basically disregarded both the Interstate Commerce clause and the 9th and 10th Amendments of the U.S. Constitution. Because of this, organizations such as the Second Amendment Foundation are preparing to challenge the federal government stating that "this is an area where the Federal government has no business." I'll be following this issue and sharing developments here.