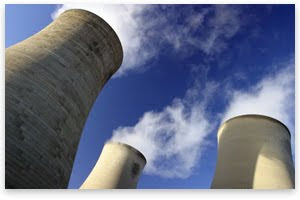 I was in Evanston, Wyoming over the Fourth of July weekend. For the fireworks show, we traveled west to a little city named Lyman. We prefer the fireworks over there to the fireworks in Evanston. On the way, we drove by several new massive windmills. I couldn't help but wonder how expensive they were for how little energy they generated. It seemed like such a waste. Ray Harvey, writing for the Mises Institute has the same sentiments in his latest look at different types of energy, including wind and nuclear:

Windmills are taller than the Statue of Liberty, and they're loud; the Audubon Society calls them "condor Cuisinarts."

Wind comes strongest along mountain crests. Thus the Blue Ridge Mountains, the Adirondacks, the Appalachians, and so on would all have their ridges lined with these monstrosities. Yet environmentalists object to the building of one small nuclear plant, which, compared with a windfarm, is tiny.

Uranium generates gigantic amounts of energy in a very small space, which wind and solar combined cannot come close to. Those who say otherwise — those who are antinuclear, in other words — have brought the world 400 million more tons of coal used per year, because for thirty years now, since the Three Mile Island accident in 1979, we've been using more coal.

Uranium is abundant, clean, and safe — in technological societies.

The catastrophe at Chernobyl — which, once again, sent greens groups worldwide scurrying to their soapboxes — only happened because that state-run reactor was astonishingly unsafe: in the words of Peter Huber, "You couldn't have operated a toaster oven out of it."

Few scientists disagree that the discovery of energy at the nucleus of the atom is the greatest scientific feat of the 20th century. All this talk about how we need to "discover a new form of energy" therefore misses the point: we've already done so. It's called nuclear energy. And it's amazing.