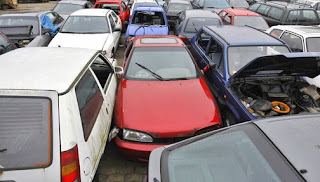 I spoke with another dealer today, this one a new Suzuki dealer, and the first thing she told me was how much of a "nightmare" the program has been for them. Without fail, every claim they submit is denied the first time, and they are forced to re-submit. This is interesting in light of the news that the program ran out of money. It probably has more to do with how many outstanding claims they've been denying and re-receiving.

Also, I asked about the cars traded in. She told me that they are mostly 2000 model year and newer. Out of the 30 cars she has in her "clunker lot," 25 of them would easily sell as quality used cars. Yet, they are forced to destroy them. She said that if they were 1990 model year and older she could understand the benefit, but everything she's received is only a few years old. Our leaders are so wise.

Anonymous said…
You are so ignorant and one sided Skyler. I look at your stuff nowadays and more and more it just sounds like blah blah blah. Move to Canada. Maybe then you will quit whining.
August 5, 2009 at 4:46 PM

Skyler J. Collins said…
Quite the argument you've got there. And thanks for looking at my stuff! By the way, your anonymity is heroic.
August 6, 2009 at 6:59 AM