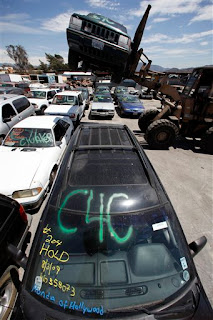 So we know that the Cash 4 Clunkers program has been a nightmare for dealers and a tool used to destroy what would otherwise be good, reliable used cars for the lower and middle classes. Now, as was obvious to some, the AP is reporting that climatologists see the program having what amounts to no effect at all on emissions:

Calculations by The Associated Press, using Department of Transportation figures, show that replacing those fuel hogs will reduce carbon dioxide emissions by just under 700,000 tons a year. While that may sound impressive, it's nothing compared to what the U.S. spewed last year: nearly 6.4 billion tons (and that was down from previous years).

That means on average, every hour, America emits 728,000 tons of carbon dioxide. The total savings per year from cash for clunkers translates to about 57 minutes of America's output of the chief greenhouse gas.

Likewise, America will be using nearly 72 million fewer gallons of gasoline a year because of the program, based on the first quarter-million vehicles replaced. U.S. drivers go through that amount of gas every 4 1/2 hours, according to the Department of Energy.

For individuals, the program scores big. Vehicle owners who trade in an older, gas-guzzling truck or car for a newer fuel-efficient vehicle can get $3,500 to $4,500 in rebates. On average each year, they will save 287 gallons of gas, more than $700 in fuel costs and close to 3 tons in carbon dioxide pollution.

The problem is, there aren't enough of these individuals to dent the national or global energy and environmental problems.

Lighthouse said…
This scheme makes no energy or environmental sense

It's of course a pity that dealers are forced to destroy perfectly good cars.
But there are deeper reasons why the scheme is wrong.

Presumably it's to save on oil/gasolene and to lower emissions:

Yet fuel efficient cars effectively means cheaper energy which - as shown by general English and Scottish research referred to below - in turn means they will be used more (instead of, for example, using public transport)

Fuel efficiency is of course an advantage people can consider when buying a car - and can compare with advantages that inefficient cars can have (better acceleration, or greater safety because of greater weight, etc, as well as a probably lower price - or they would be efficient already).

As far as government is concerned, any oil shortage - for geopolitical or economic demand reasons - raises the gasolene price and - guess what - increases demand for fuel-efficient cars anyway, no need to legislate for it.

Another reason is that - as research at Georgia Tech has shown - it is possible to clean emissions of CO2 (and other substances at the same time).
A fuel-neutral emission tax on cars therefore makes more sense:
If it is economical to make - or to fit current- gas-guzzling cars with emission processing then, again, there is no reason for government to try to lower the use of such cars.

Any regulatory measures should therefore focus on emissions, rather than the fuel used, and emission taxation on cars retains consumer choice, while also giving significant government income with the lower sales of high emission cars, income that can go to projects that themselves lower emissions eg. electric car manufacturing subsidies etc.
(Regardless of whether CO2 reduction makes any sense, lowered emissions of course have their own benefit, for all the noxious sulphur etc substances that the emissions also contain)

For more see ceolas.net/#cc25x
Why all energy efficiency regulation is wrong - from light bulbs to buildings http://www.ceolas.net/#cc2x
August 6, 2009 at 9:55 AM