The Income Tax and State Sovereignty 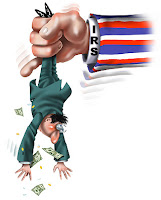 J. Bracken Lee was the Governor of the State of Utah from 1949-1957. He wrote the forward for a book titled The Income Tax: Root of All Evil by Frank Chodorov. This book is on my to-buy list. What Lee wrote is well worth a read:


This was, to be sure, "the home of the free and the land of the brave." Americans were free simply because the government was too weak to intervene in the private affairs of the people — it did not have the money to do so — and they were brave because a free people is always venturesome. The obligation of freedom is a willingness to stand on your own feet.

The early American wanted it that way. He was wary of government, especially one that was out of his reach. He had just rid himself of a faraway and self-sufficient political establishment and he was not going to tolerate anything like it in his newly founded country. He recognized the need of some sort of government, to keep order, to protect him in the exercise of his rights, and to look after his interests in foreign lands. But he wanted it understood that the powers of that government would be clearly defined and be limited; it could not go beyond specified limits. It was in recognition of this fear of centralized power that the Founding Fathers put into the Constitution — it never would have been ratified without them — very specific restraints on the federal government.

In other matters, the early American was willing to put his faith in home government, in a government of neighbors, in a government that one could keep one's eyes on and, if necessary, lay one's hands on. For that reason, the United States was founded as a Union of separate and autonomous commonwealths. The states could go in for any political experiments the folks might want to try out — even socialism, for that matter — but the federal government had no such leeway. After all, there were other states nearby, and if a citizen did not like the way one state government was managing its affairs, he could move across the border; that threat of competition would keep each state from going too far in making changes or in intervening in the lives of the citizens.

The Constitution, then, kept the federal government off balance and weak. And a weak government is the corollary of a strong people. The Sixteenth Amendment changed all that.