Inventions as Scientific Discoveries and IP 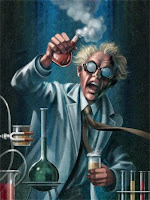 In an LDS Liberty group topic about intellectual property, I had these thoughts about inventions being scientific discoveries and the consequences of that. My particular example is the cure for cancer, but the same point applies to any drug that saves lives, or invention that makes life easier:

I thought I'd turn this on it's head a little. Considering patents for drugs. I see inventions as nothing more than scientific discoveries. A discovery that if I combine this widget with that widget, I have an invention I can do this with. Likewise, if I combine this chemical with that chemical, I have a new drug that fights this disease.

Now, regardless of how many resources I've expended leading to the new discovered drug, once discovered, what right does the discoverer have to monopolize it? Let's pretend someone finds the cure for cancer. He immediately patents it and takes it to market. As one producer with a monopoly on the cure for cancer, he's able to charge a higher price and the time it takes for the drug to become affordable to everyone, and reach everywhere on Earth is obviously much longer than if there were several producers competing with each other to sell the cure for cancer.

As important a discovery as the cure for cancer is, why should the one who discovered it be allowed to hold it back from getting to those who need it as cheaply and quickly as possible? I have no doubt that such a granted monopoly would indirectly cause the death and suffering of millions of individuals. By what right is the discoverer able to monopolize such a life-saving drug (formula)?

(I would also argue, ethically and morally speaking, anyone discovering the cure for cancer should, as a matter of personal principle, be more concerned with distributing as fast and far and wide as possible than monopolizing it and holding it back. Patent systems enable what I would consider the evil of such holding back of something as important as the cure for cancer.)

Let me clarify one more thing regarding IP and real property. Since IP violates real property because it restricts the owners use of it, if someone had the formula and ingredients to the cure for cancer, it would be a great evil to prevent him from using it to his or others' benefit, ie curing cancer. Would it not? This is what IP does (at the point of a gun). How can that be defended?

On the cure for cancer:

The same could go for any invention that would make my life easier. If I have the materials and know, say, how a shovel is engineered, what right does the original inventor have in preventing me from organizing my material into a shovel, in order to make my labor easier? Once the shovel is fastened, like anything owned, I have a right to trade it for something more valuable to me, say money so I can buy much-needed prescription drugs, or even food. Another example used by some in the group was a log cabin. The first person to invent a log cabin patents the idea and suddenly everyone else is prevented from copying the idea without paying him royalties. Just because you are the first to discover some new invention (I say discover because that's what it really is, a discovery, scientifically speaking), what gives you the right from keeping other people from making it and keeping it or making it and trading it for something more valuable? Some inventions have even been discovered separately by people in different places at the same time. Who gets the patent? The first to the patent office?