The Man Who Saved a Planet III 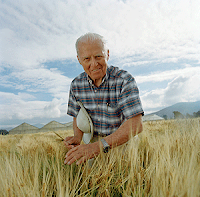 I just couldn't pass this by without sharing it here. Donald Boudreaux, in his usual eloquent sting comments on Borlaug's contribution, from a 2004 Cafe Hayek post:


Relatively few people recognize Mr. Borlaug’s name. Makes me think of the world as a place in which melodramatic loud-mouths thunder to and fro in the foreground while actually doing very little of any value but stealing all of the credit for civilization and its benefits. Meanwhile, in the background, millions upon millions of decent, creative people work diligently at their specialties – welding, waiting tables, writing computer code, performing orthopedic surgery, designing shopping malls, running think-tanks – each contributing to the prosperity of the rest. Some contributions are larger than others – as Dr. Borlaug’s certainly is – but even a contribution as colossal as his is quickly taken for granted, any potential notice of it submerged beneath the swagger and bellicosity of the political classes who pretend to be prosperity’s source. How wrong. How arrogant.