"How It's Made" - Market Miracles 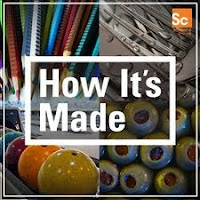 My 6-year-old son's always asking me how different things are made. He sometimes has some unusual requests. I can only tell him so much before he just gets confused. Enter the Science Channel's "How It's Made". I've watched this program in the past, but he was too young to care. I re-discovered it while channel surfing. I quickly got him to watch it with me, and he fell in love with it. We set up our DVR to record the last 2 episodes, so there's always something new for him to watch.

What is "How It's Made"? To me, it's Leonard Read's "I, Pencil" on steroids. For those unfamiliar with Read's essay, it's a story of creation from the perspective of an everyday pencil. The essay's thesis is that it's impossible for any single person to make a pencil. The story traces the pencil's coming together after it's parts are found all over the world. It takes thousands of people, all of whom are working to satisfy their own self-interest, to manufacture the machines, which then manufacture the parts of the pencil, all coordinated by market prices, to make your common, everyday pencil, sold for pennies on the dollar. It's a testament to how the market works, in near-miraculous fashion.

"How It's Made", unintentionally accomplishes the same demonstration of the market. It shows how ingredients, all of which took a countless number of self-interested people to assemble, come together to make such items as an organ, balloons, nails, a wooden door, a bicycle, light bulbs, and on and on. The program's only a half-hour, and usually showcases between 3 to 4 items. Each item could easily take an hour to showcase it's entire story of creation.

"How It's Made" is a must watch for anyone interested in knowing how different products are manufactured, but also for anyone interested in just how important the free market is in allocating scarce resources and raising our standard of living. That point cannot be stressed enough. Even the slightest government intervention acts as a wrench thrown into the machine that is the economy. The economy recovers and adapts, only to be less efficient than it was before. As my son gets older, I'll be able to use this show, among other things, to teach him all about how an economy works.