Polygamy and the Liberation of Women 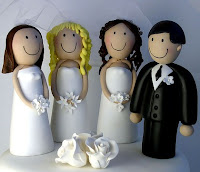 Yesterday, I shared three articles that have given me a brand new perspective on the institution of polygamous (plural) marriage. I thought I'd say a little bit about them. Here they are again:
The first one does a good job at expelling the notion that polygamy is weird or unusual. It explains how many Americans are today polygamous, mathematically speaking. I don't have much else to say about this one.

The second one introduced to me something about polygamy that I had never considered, how it's beneficial for women. Married men of high status (prestige, wealth, or both), would no longer be considered off-limits. They would very much still be in the running, competing with other men. I think this would cause a higher number of men to improve themselves, their skills, their attractiveness, and so on. That's what competition does, and should do. But it will also cause women to improve themselves. Women wouldn't hold the belief that "all the good men are married," and so they would improve their attractiveness, their lady-like skills, and so on. Of course, as the article notes, men suffer. Those men who don't care to improve themselves so as to compete with other men would be less likely to find a good wife, one who has made herself more marketable by improving herself in various ways. Women have the upper hand over men under polygamy.

The third article as well introduced to me something that I had never considered, and that is the liberating factor. If a woman was less adept at homemaking and child-rearing, she could partner with a woman who was. She would be free to have as many children as she would like, and still work on her career outside the home. She would have an intimate knowledge of her husband, and her fellow sister-wives, and how her children would be raised. They wouldn't be raised by strangers in the local daycare. They would be raised by her sisters, of whom she shares common values. The husband and his wives could all share in the duties inside and outside the home, all working together to make the job of raising a large family easier to bear. This is incredibly liberating for women. Just imagine the possibilities, and consider those Mormon women that lived this way for quite some time.

Now, I want to be clear, I'm not advocating that anybody start practicing plural marriage. The only time plural marriage should be practiced is under the direction of the Holy Priesthood of God. (I'm not saying that that is the only time, legally speaking.) It was for a time, but the state got it's way and the practice since ceased. It's unfortunate, I think. If you look at the early Saints, their lives, their liberty, and so on, one can easily make the connection that the institution of plural marriage as practiced by the Saints of God was a beneficial part of their society.

I have to be completely honest. I see, as did Joseph Smith and his brethren, the righteousness in this institution, and would gladly practice it if allowed to do so. But only under the direction of the Holy Priesthood, and only as a free man. The black market a la Warren Jeffs has done horrors to this once sacred practice. May freedom be restored one day, is my wish.

Secondly, my opinion is that it is every person's right to practice their religion and follow the dictates of their conscience. The practice of plural marriage is included in this. My church may not practice it at the moment, but no one whose church does practice it is in any way infringing on my rights to practice my religion. Let them be, I say. Any laws that may presently infringe on the right of a person to engage in polygamous relationships are surely unconstitutional and unbecoming of a country that believes in freedom. LDS Mormons (a distinction I make because there are many Mormons who are not members of the LDS Church) should be at the forefront of the fight to preserve religion freedom, even for Mormon polygamists.

(Not to mention, from a sociological perspective, there are many practical benefits to the practice, as your links demonstrate.)
August 2, 2011 at 3:59 PM